Behind you! The anti-noticing pantomine called Pokémon Go

The other day I had a conversation with a good friend and colleague on The Hashtag Noticing Project Facebook group. So, all about #noticing then, especially in order to help you be more creative. Our online chat was about the childhood books that had that had sparked our curiosity and therefore had led to the creative things we do now as adults. Part of that conversation asked if going out with an I-Spy or Observer book and #noticing, and indeed, ticking off the objects in the environment and world around us, was “better” than today’s Pokémon Go phenomenon.

Let’s get one thing straight at the start. I am not anti-computer games of any format. I am convinced that much of the skill you need to play them helps your creative skills and your ability to get along in life in general. But that is a separate post for another day.

Another thing I should mention is that Pokémon Go, which I have not played, is clearly a huge amount of fun and that in itself is a good thing. You cannot have too much stuff that makes you cheerful (if it does! It seems it might make you frustrated and angry.). But we have all heard of the people who have been wandering about in an obsessed daze hunting the Pokémon critters only to find themselves in the middle of the highway with cars bearing down on them. Then there were the players who entered a tiger enclosure. Or the person who discovered not a cute Pokémon, but got a real cadaver instead. We have all, no doubt, seen the videos of daft people furiously holding up the traffic while they figure out where the Onix is.  Someone we know bought a rural retreat only to find it is now a Poke Stop surrounded by the walking dead with their eyes fixed on the their smart phones. And then there are the people who were attacked or even killed because they were not paying attention to the real world. This week a video has been released expressing frustration that while white people in America can play the game, it is a different story for a young black man walking round in circles “looking for a Jigglypuff” – how long before he is arrested or worse? 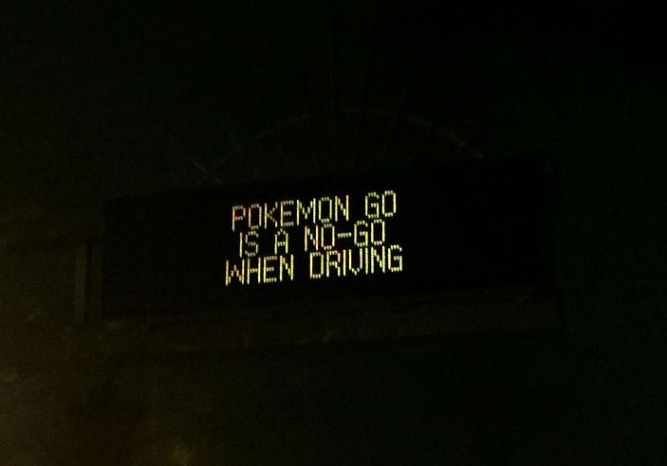 All of that has led to the belief that Pokémon Go players are the best new butt of jokes replacing village idiots, dumb blondes or Irish/Kerryman. That is surely unfair as it only takes a couple of twits worldwide to blacken the name of millions of others. How often do we see that kind of stereotyping in today’s aggressive world (and aforesaid jokes)? And anyway, there are also the nice, shiny stories of good occurrences, like the Pokémon Go player who found a cage of, not Pokémon, but twenty-seven abandoned hamsters and gerbils which they promptly rescued. Not to mention the theory that the whole thing has been got up by certain mobile phone companies in cahoots with the Pokémon makers trying to flog more 4G.

You could write a thesis about why Pokémon Go shows up all the ills of our society, especially the control corporations have over us “lemmings”. See this interesting article for a start. Nevertheless, my issue with the game lies in the fact that many gaming companies, especially those where kids might be the main players (perhaps!) think that by adding a footstep counter or taking the game outdoors might make the games healthy and avoid thrombosis. I can see why they might want to rebuff criticism and this is not so much of a bad thing. But is having your face buried in a miniature screen out in the wild really that good for you? And in any case, it is only a nod to healthy living to sell more games.

Getting outside and walking, even just walking itself, is known to be good for your health as an all-round panacea. But what is less well known is that walking is beneficial to creativity and coming up with ideas. Many, many creative people have used this technique deliberately to help prompt their thinking and Charles Darwin, while wrestling with the theory of evolution, actually had a path built in his grounds to walk around to generate ideas. I often send my design students off on a walk to help trigger their ideas. I send them off individually or in teams to come back with 100 ideas on a specific topic. It really works. I see them mentioning their “divergent thinking walks” in their reports. They think it works because you see –  #notice – lots of things around you that jog connections in your neurons and give you new ideas. The point is that you are looking around you and the things you see are interesting in themselves. Above all, you cannot have fresh ideas if you don’t add more ingredients into your brain’s recipe.

And then there is mindfulness. Very trendy at the moment, but nevertheless really useful. We live in a frantic, screen-driven world (read corporation-driven). But we also need to calm down, get out and see what Mother Nature has done for us. If we don’t appreciate the real, living, blooming world out there, how are we ever going to save her? To stop ravishing her and to count her and her myriad children of any species of any value? It seems not many of us do that now. It also seems that many people also value made-up creatures more than the real, living breathing, sentient ones that surround us. Mindfulness is a way of stopping everything to notice (I am not going to facetiously write “#notice” here; doesn’t seem appropriate). Mindfulness is about seeing and indeed enjoying the small details of our day-to-day lives and the environment around us. It is about being kind to ourselves and fostering empathy. Getting out and about is good for mindfulness and for being open. But can you do this when you are obsessing over which way lies a Pikachu or Charmander (yeah, or whoever)? What about the actual birds, foxes, colourful beetles and wildflowers?

So the problem for me, as a creativity educator, is that the game is taking a lot of time but not giving back any real value. It is competitive (“I have a better find than you!”). And it is a distraction – not only from the real world but from the fact you are being literally steered by your phone, not by your own decisions. I am not asking to ban it or take away people’s fun. The people I know that play it are having a really good time. I am just asking, why does it take a computer driven game to get people outside but then still it has them looking at and exploring via the screen?

But maybe this political clash between existing and noticing is not a new thing at all. Back in the 1960s the radical French art group, The Situationist International, used a “game” called Derive, in which they wandered the streets of Paris in a “random” manner. They let the architecture of the streets waft them along as they gave themselves up to the affordances of the environment and noticed the detail of the byways they found themselves in. Unlike Pokémon, they were looking at the places themselves. They were in the moment and the site, feeling the experience. It was considered avant garde to do this. Modern humans, it seems, need a purpose to be anywhere. That purpose or direction or focus often masks the better opportunities around us. PS: Nowadays the affordances of places, or the way the terrain (or your phone) induces you to move around it, is deliberately used in design; in the case of supermarkets not always in our favour and indeed the companies making Pokémon Go and other similar games now drive where you go and they can monitor it too.

Of course, before The Situationists were the Impressionist flâneurs; men-about-town who sumptuously lounged around Paris and elsewhere, as if casual, but were really hawk-eyed hunters of the mundane and the normal, turning their petty findings into innovative and daring art. Art that is now the best-loved of all art movements, but was at the time too cutting, too new and too critical not only because of the “unfinished” style of painting, but also because they saw and reported the polarised world of homelessness, prostitution and working class people and compared it with the so-called normality of the opera and racetrack. Humans who notice real things are dangerous.

Creativity is a human drive that powers us forward, that has built civilisations and has enabled each of us to manage our lives. We all have the potential for it. But we need input for it to develop. We need to have curiosity and I am not sure that things like Pokémon do that. Sadly, we are too easily distracted from curiosity and we are lazy. If some bright spark has been creative enough to invent a Pokémon game where you go out into the real world and catch your virtual creatures, then we will settle for that (Another PS: It is a very innovative idea and praise to the inventors, though remaining sceptical about the agenda behind it). Meanwhile, there are some Pokémon-less, possibly geeky, possibly loner kids outside right now, who are actually noticing their material world, considering it and storing real experiences in their memories who will one day retrieve these thoughts and connections and hopefully, save the planet.

Meanwhile, keep enjoying Pokémon Go. Have fun. Play. All good. Just have a look around you at what is really there too. Oh yeah, and watch out for the traffic….and anything else that is behind you…..(“Oh yes it is”).

If you would like to try out some #noticing, such as Derive or Divergent Walking, you might like our course, Creative Training: How to be more creative.

One year of the white picket fence.
In the moth hunt zone.
Hey, Hank, it's a rain-wrapped....rain?
The old bulbs keep coming. Huis Ten Bosch, Abu Hassan and Honeymoon.
Quinces in the making
First tulips in this garden opened this week. I brought these old bulbs with me.