Object Obsessions: Sherlock Holmes and the Internet of Things

“Warning: Artificially increasing the subjective value of objects will most likely lead to unintended consequences.”  Rob Walker and Joshua Glenn

Over the last couple of months I have been involved in a happening from Columbia University about interactive story telling. The name of it is Sherlock Holmes and the Internet of Things. The happening culminates at the end of October in a few global interactive crime scenes at which participants have to figure out the story from connected or adapted objects. These objects are just ordinary things that have been “enchanted” with digital manipulation to make them other than the sum of their parts. The whole thing is a giant experiment in collaboration and imagination and nobody yet knows how it will turn out or what stories the live action crime-solving “detectives” will evolve. My role, as part of one of the many small, international online teams, is to think like the “killer”; but one who wants to leave clues and perhaps red herrings…!

We started our explorations with a game in which we marked out with tape or chalk a body from an imaginary crime scene. The more odd or picturesque the scene we made the better this worked. Then photos were put on Instagram (#sherlockiot) because it is the perfect platform to view a photo and add to its story via the comments. Then another person added in a description of an object or two that were supposedly found at the scene. Then a third player amalgamated the photographed crime scene and the objects to make the connections into a narrative. Each player does all three activities, making online connections with other players.

This Instagram crime scene game was, at the risk of sounding childish, really fun and exciting! Playing, designing and story-telling are all involved. It was a small rehearsal for the principles of the event happenings to be staged in real places later this month. A couple of beta tests have already been carried out – one in New York’s Lincoln Centre a fortnight ago and one at Power to the Pixel at London’s BFI Imax on 13th October (today). 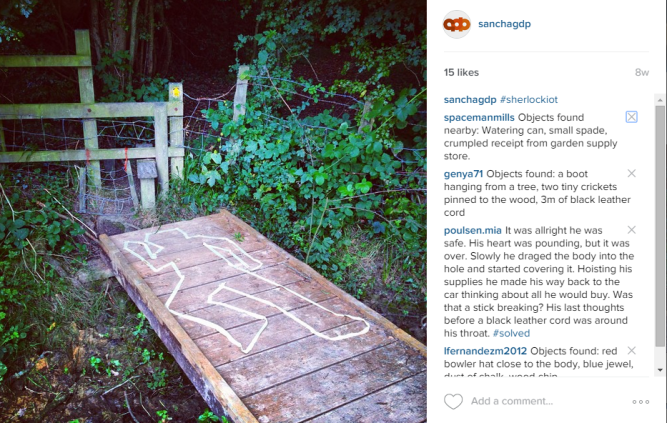 Above: Another example of an Instagram #sherlockiot crime scene

Another part of our preparation has been to go over Conan Doyle’s Sherlock books to select from them objects which appear in the stories that we feel could potentially be used, even updated, as props in the live events to prompt the participants to make their own narratives about the crimes scenes there. They also need to be objects that will make the participants feel that a trace of their engagement is left within the story (like leaving the object comments on Instagram was), and that they have agency in making the final narrative (like the Instagram stories). The objects also have to connect the people undertaking the live activity and help them interact with each other and the other detective groups (like the Instagram platform).

My international group chose objects such as a trapdoor, a candle, a typewriter, a key and a telescope. A justification of why they are interesting or appropriate went with them. I selected a newspaper that shows, to the trained mind, like Sherlock’s, that articles that just seem to be ordinary bits of unconnected news, are in fact evidence of a wider conspiracy by some evil genius master mind like Moriarty. There will be more from The Graphic Design Project on this topic soon…watch this space! 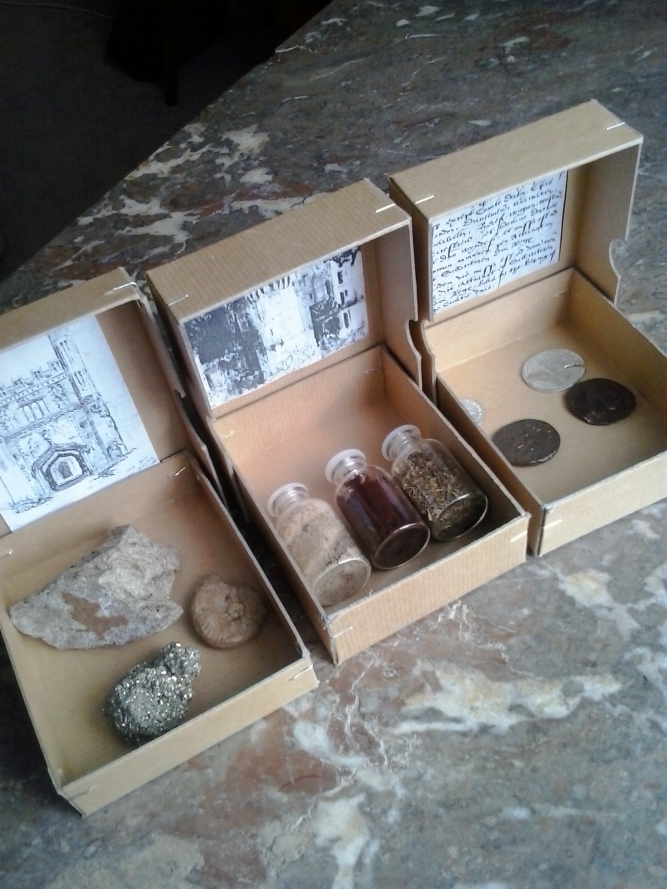 Above: The Graphic Design Project learner response to Hiller’s From the Freud Museum

The idea of presenting a group of objects and letting the viewers/users/participants make their own stories from them is right up my street. I have, for instance, always admired and referred to From the Freud Museum by Susan Hiller. I’ve lost count of the times I have used this in my teaching to demonstrate audience agency, semiotics, ideology and indeed phenomenology. But mostly, I just love it because I connect with it. In this artwork Hiller sets out a collection of objects in museum style cardboard boxes, set in rows and displayed in a large vitrine or glass cabinet, mimicking a serious museum exhibit. Each box contains an object or set of objects, such as vinyl or Bakelite records, a ouija board or glass vials of sand. The upright box lid displays a printed piece of ephemera. And then each set of contents, with their printed piece, is given a name label. The key to the audience interaction is that the three things – contents, printed piece and label – are often randomly put together. They don’t necessarily have a real link. I use the word “random” loosely here, because as much as Hiller wants to make the audience build their own inner stories from her selections, select them she has; and even/especially the artist’s mind makes its own judgement of what is appropriate for an artwork.

I also like the mystery clue books by Nick Bantock, especially The Egyptian Jukebox, in which he illustrates drawers full of souvenir-like objects, some of which are clues. In this case each drawer is linked to a different country and the pieces in it help the canny reader work out the answer to the book’s mystery. It is not easy, but it is delightful to look at.

I have also been both amused and educated by the “literary and economic experiment”, called Significant Objects, carried out by Rob Walker and Joshua Glenn, in which junk, and often tacky, objects were bought cheaply in thrift stores and then resold for much higher prices. Most cost on average $1.25 and sold for over $50.00. Some even reached the hundreds of dollars, like a $3.00 golden rabbit candle which sold for $112.50 or a Missouri shot glass that cost $1.00 and sold for $76.00. How did they manage this? They asked guest writers to concoct fictitious stories connected to each of the objects and then sold the objects on e-Bay, each with its story in the description field. Even though it was stated that the story was made-up it nevertheless inflated the prices. Conclusion: people love to connect an object with a narrative and this adds actual measurable value in a financial sense not merely in an emotional, nostalgic sense. Marketing people have in particular looked at this experiment with fascinated eyes, working out how it might benefit them.

And I must not forget another, um, experiment, artwork, story….by Nobel Prize winning author, Orhan Pamuk, who created a real museum in Istanbul to house found objects that he described and displayed as belonging to or connected with the fictitious characters in his novel, called The Museum of Innocence. Avid readers of this blog will have seen me mention this before! He has also written the story of his museum-filling obsession in the wonderful book, The Innocence of Objects. Incidentally this narrative becomes as much a social history of Istanbul people and their relationship with objects as it is a tale of creating a story-museum. Which underlines my point that objects have stories that are important to us all. How often can you not bring yourself to throw away some quite ordinary, inexpensive thing that has a connection or memory for you? This reminds me of the experiment in which people could not bring themselves to deface a photo of their mother, even though it was just a bit of paper. Objects become imbued with spirits; even to us today we feel their totemic power. 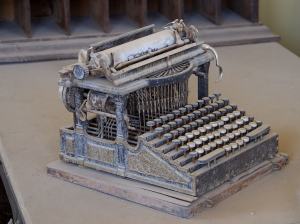 Above: “His reply was typewritten, and revealed the same trivial but characteristic defects”. Our plans for a clue-projecting connected typewriter for SherlockIoT

Meanwhile back at Sherlock Holmes and the Internet of Things, my group is at the stage of having chosen the “Revealing Typewriter” as the object that we will design and prototype in the hopes that the event developers will choose it as one of the objects digitally connected at a live event. Why revealing? The original Sherlock Holmes typewriter had faulty keys that acted like finger-prints to enable documents typed on it to be traced back to the author.

“It is a curious thing,” remarked Holmes, “that a typewriter has really quite as much individuality as a man’s handwriting… Some letters get more worn than others, and some wear only on one side. Now, you remark in this note of yours, Mr Windibank, that in every case there is some little slurring over of the ‘e’ and a slight defect in the tail of the ‘r’.” – From A Case of Identity by Sir Arthur Conan Doyle, 1891-2

We hope to develop this feature but our typewriter will potentially be connected to media such as emails, SMS or  possibly to holograms or audio and even perhaps to other typewriters in the other live event sites.We are hoping that the participants in the live event will be curious about the objects and want to engage with them. A typewriter would perhaps generate nostalgia for those familiar with this piece of now pretty-much redundant equipment, and it might arouse amusement and interest in the younger ones. Certainly my own degree students were fascinated by quite a decrepit and plain-looking one that was brought to class. We aim to make our “enchanted” typewriter invite people to tinker  by startling them with a rattle of keys hammering on the carriage as it starts when approached. Hopefully that and “???….” appearing on the paper will be understood as “write to me!” We want our users to make their own stories, and while the typewriter can give them clues to our background story including the faulty finger print letters (sorry, no other spoilers) it doesn’t matter if they make up their own version. In fact, the more disruptive they get the better the fun will be. Perhaps someone will leave typed notes for the other participant groups to put them off the scent; plenty of suddenly-invented red herrings. Oh yeah, and having a real life working typewriter is a bonus if the Wifi fails!

Thanks to my Sherlock group members for the collaboration through glitchy documents, last-minute uploads and long Hangouts at the end of busy days: – Rhys Miles Thomas, Oscar Carlsson and Matthew Hart. Also a mention of thanks for previous members who have gone to connected places new; Leon Modley and Jannina Pigaght.