The current exhibition at the British Library is one that all students of design and media should see for the simple reason that much of graphic design itself is simply about persuasion – whether you think that is good, bad or indifferent probably depends on you and, you may argue, the context of each project…..

What this show makes very clear, thankfully, is that one man’s “propaganda” is another’s “public relations”. We live in the age of “spin” and we know and usually accept that politicians will relentlessly engage in this during elections and time of war. But what we might be less consciously aware of is that spin/propaganda goes on all the time with just about every broadcast and publication we see.

The exhibition includes many examples of the major propaganda posters, leaflets and films from war-time. Today some of these look ridiculous and even funny, but many, particularly the films, are horrendous and worrying (especially the racist-based ones). The aim of most of these was to frighten people into co-operation with dodgy ideologies. Hitler removing his jolly, clown-like mask to reveal the skull of death works visually to both mock the German leader and to instil fear of him. 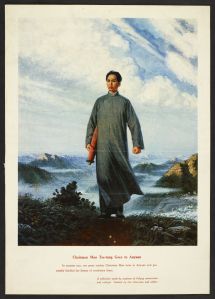 One of the best features of the exhibition is the detailed breakdown of the symbolism behind imagery. A portrait of Napoleon and the above image of Mao are just two of the examples which reveal what the clothing, context and stance of these powerful figures mean.  Mao’s plain costume reveals his humility, the countryside is a patriotic element and his being alone shows that he needed time to think and plan for his people. In fact, the idea of a charismatic leader is very large in the propaganda world, giving a father figure shape to many dictators. The handsome young Stalin looks positively studious and passionate in this portrait and an early photograph of Hitler gently patting a little African girl on the shoulder raises many questions, not least how did Hitler look so young and elegant? 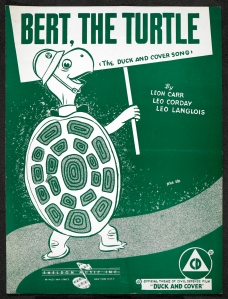 above : Tufty Club Safety Sheet, c.1964, Royal Society for the Prevention of Accidents

One of the things I enjoyed most about the Propaganda exhibition is the amount of “ordinary” objects on show; things that probably came out of some chest of drawers or filing cabinet. A lot of propaganda is meant to be kept and handled, such as the WWII handkerchief that would impact more on the person blowing their nose on it than a wall poster might do. In this case the slogan was the famous “Careless Words Cost Lives” motto written under several cartoons. I recognised many items from my own subjection to propaganda/public relations, including the recent pamphlet warning all UK citizens to be aware of terrorist threats and what to do if one occurs. Many of these kinds of supposedly helpful publications were actually laughable, such as the Duck and Cover song (above) and British leaflets showing how to pull up a few planks and mattresses to make a shelter from nuclear blasts.

But I did have very fond memories of the Tufty Club and road safety. No reason to be sceptical about this (is there?). Unless we admit that cute things from our childhoods might just be the messages the spin doctors implant in us.

And at the end you encounter the future of public relations, the Tweets and Facebooking, with Chorus, a work displaying three history-making twitter events. Do we make our own propaganda now in curating ourselves online?

This is a far reaching display of propaganda and pubic relations spanning how simplistically bad enemies are, how good we always are ourselves (or not) and how insidious messages are at creeping in to unexpected places. Even when we know there will be agendas we – especially as collectives – are swayed. What I took away with me was how smart and well-designed was the propaganda from the time of the Russian Revolution and after – how slick the collage and how contemporary seem the educating, community-boosting, medicine-bringing, women’s rights promoting items like agit-prop trains. My colleague and I asked ourselves is it better to have some education, even if provided by propagandists, or no education? What do you think?

Chorus, July 17, 2013, 3840 × 1600
The exhibition is on until September 17th 2013 and you can see more about it at the British Library website here.
All images by permission of the British Library press office.
PS: More on “ordinary” design and an exciting new GDP project coming soon…