The other week I went on yet another bitterly cold day to London to see the Roy Lichtenstein exhibition at Tate Modern. I’d been really looking forward to this and was hopeful of a thrilling experience. When we went in I already had a bit of a headache and oh! those dots…..I’m sure there should have been a health warning. Talk about visual disturbance. And the show was so crowded that it was impossible to get a good view of the art works and to stand back and admire was out of the question.

The best room was the one with the paintings lifted directly from comic books, including the famous Whaam and Oh Jeff I Love You Too. What was clear at this enormous size was the emphasis on composition done so well in comics and graphic novels. Lichtenstein said he wanted to show military aggression in an absurd light but really he made it look cool and by using a comic style removed the realness, leaving only the fun.

My colleague and several students were horrified that Lichtenstein had used comic images wholesale, only changing the scale. They felt that this was “cheating”. Is it? Isn’t art what you say it is and magnifying the scale so dramatically gives the viewer many new insights. If art is about seeing, not just looking, then this stuff is high art indeed.

But…where was the development, the move to new areas? The only thing in this direction was Lichtenstein’s use of famous artworks from Picasso or Matisse to re-do in dot-form. What would Picasso look like if he was a comic book artist? Well, I think you can only take so much of dotty pastiche. Mozart was accused of having too many notes, so I wonder if Lichtenstein can be chided for too many dots? It seemed he was just churning out a style. And seeing the works together was too bright, too bold, too in your face. Note to self – when discussing Lichtenstein with art and design learners just use a couple of images at a time.

Must be getting old. Had to have a sit down after and wonder if Modern Art is all I used to think it was. The Lichtenstein show is on until 27th May 2013.

After that we went off to my old haunt, the National Gallery, to see the one-room free exhibition about Frederick Church, the nineteenth century oil sketch painter from the American Hudson School. This was really lovely. Tiny little sketches with so much detail and illusionism that it could make a grown man cry! Such a realistic sunrise over a little river, slightly bleak but full of hope. The rays of the sun were painted almost comic-book style but if you kind of blinked and looked at it for a split second it was the real sun! Must’ve looked odd to the other exhibition-goers. There were also images of fallen trees or a bonfire – so mundane, but made so attractive that you wanted to step into the picture and warm your hands.

Church travelled round to tropical places where he depicted the ferny leaves so carefully you could almost feel their softness. Red sunlight glinting off the top of icebergs looked beautiful and threatening at the same time, and the rainbow across Niagra Falls in the single large scale work seemed to suddenly appear in a beam of sunlight as you stood looking at it.

What a great life style Church must have had, pootling around making art. He ended up painting the area around his own castle – can’t be bad.

But what’s this? Another art “cheat”? Church sometimes painted on top of photographs! Shock horror. Does this count, then? In fact, you couldn’t tell the difference between the painted from scratch ones and the ones over prints. Don’t all artists and designers make use of the latest technology to enhance their creations?

Must end by decribing the first sketch in the show. An early evening sky; cloud tinged with orangey-red breaks apart to show the stars beyond. But the formation of the clouds is in stripes and suddenly in the sky is “our banner” the starts and stripes. This one too was painted over a print, so the event actually happened. Very cheesy, but great fun!

Through American Eyes: The Work of Frederick Church is on until 28th April 2013 – don’t miss it!! You can see images of Church’s works here on the National Gallery website and you might be in time to catch an event centred around his work. 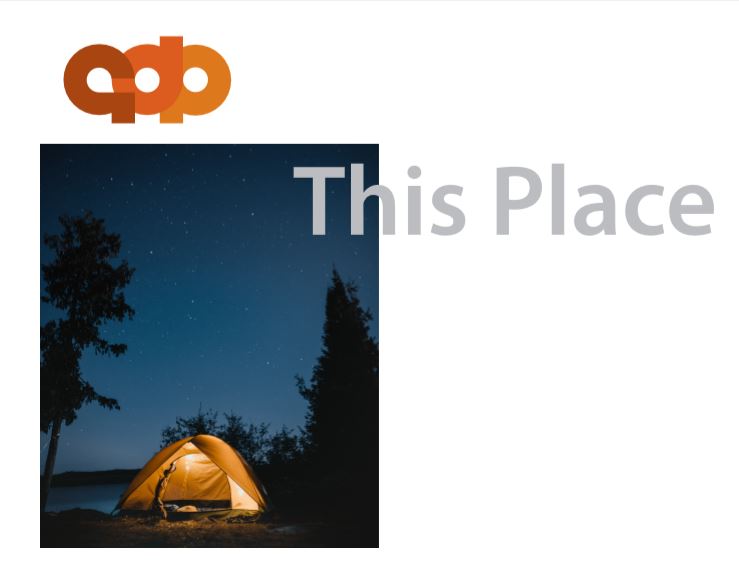 In This Place, exploring the work of some of the world’s greatest documentary and landscape photographers helps to give you inspiration in this project, in which you will make magazine double pages spreads. Choose your place and the reasons to report on it and set about taking photos and creating the spreads. This is a graphic design project that should interest everyone, whether you are specialising in graphics skills or simply interested in exploring a topic. It is also suitable for those with an interest in journalism. This project develops magazine layout skills (and build on easier layout projects, like Celebration). Previous experience: none. Level of difficulty: straightforward.